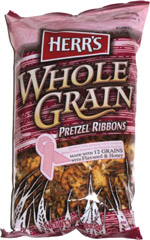 Taste test: These pretzels had a very unusual shape, as they were supposed to look like those breast cancer ribbons, but instead of making the ribbons pink, they kept them pretzel-colored and made the bag pink.

The bottom of each piece had sort of a pattern of burn marks, and the top had not just salt, but also a variety of seeds — flax, poppy, sesame and carraway, according to the ingredients. The taste varied quite a bit from one bite to the next, depending on which seeds and how much salt was in any given bite. Our tasters generally though these were OK, as the salt and mix of seeds did taste nice, but some people noticed kind of a bad aftertaste too.

From the package: “Made with 12 grains with Flaxseeds & Honey” ... “Herr's® is a proud supporter of women's health. So, to help in the fight against breast cancer, Herr's® will be donating 5 cents for every bag sold to support Breast Cancer Awareness and Research programs.*” ... “Herr's® will donate up to $15,000.”