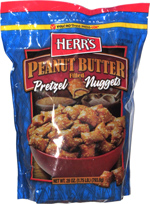 Taste test: We've reviewed quite a few snacks from Herr's over the years, but this one immediately stood out as superlative in at least two respects. Come to think of it, three.

1) The fairly large bag was by far the heaviest Herr's snack we've lifted. 2) At $8.99, it was far and away the most expensive. 3) It was the only snack from any company we've seen that had a Velcro resealing mechanism — after lots over the years with various kinds of Ziploc-style reclosures.

The nuggets themselves were much like the other PB-filled pretzels we've tried: slightly crunchy, nicely peanut buttery, with a good helping of salt on the exteriors. Easy to consume by the handful. We shared these with some very hungry folks who were working at a water station during the cold and windy New York City Marathon, and the energy provided by these nuggets was a key to the success of the entire operation.

From the package: “How do you make a great pretzel even better? Fill it with peanut butter. Herr's® Peanut Butter Filled Pretzel Nuggets combines the savory goodness of a pretzel baked to a golden crisp and then fills them with creamy sweet peanut butter. The result? Pure peanut butter pretzel perfection!”

This snack was discovered by Jeremy at Gristedes at 103rd & Broadway. Review published December 2014.