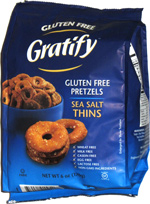 Taste test: These pretzels were ring-shaped and flattened, similar to Pretzel Crisps, but they were actually quite different than most pretzels in the world, as they contained no wheat, with the primary ingredient being corn instead.

We crunched in to find that they basically tasted like regular pretzels, with a middling level of salt and nice pretzel taste. There wasn't as much salt visible as the pictures on the bag showed, but there was still enough. The feel was very different from wheat pretzels, as they were way more brittle and crisper, but the different texture wasn't bad, just different — good, in fact. Our snackers were big fans, especially a few who have sensitivities to wheat, as people liked the taste and didn't miss anything as a result from the change from wheat to corn.

From the package: “Feel Good About Eating Gluten Free” ... “Gratify™ Gluten Free pretzels are a perfect snack for people with celiac disease and those who must avoid gluten in their diet. To others, perhaps like you, avoiding gluten as a lifestyle choice is a decision that's just gotten easier. Now eating rich tasting pretzel thins is one indulgence you won't have to sacrifice.”