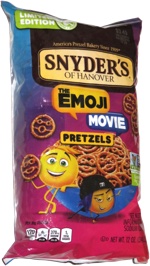 Taste test: I'm not going to comment on the movie here, because I haven't seen it and probably won't (but the trailer seemed pretty bad). However, I will comment on how my experience with this product reflects how problematic it is that emojis are gradually replacing all other forms of communication.

The back of the bag had good photos (at exactly 100% scale) of the five different emoji shapes used by the pretzels inside — naming them "#surprised, #cool, #sad, #happy and #worried — so I grabbed one of each to take the picture that ultimately ended up above this review. After shooting the picture, I discovered that I had used two of the #happy ones and none of the #cool ones. In my own defense, there's barely any difference between them. The mouth looks the same to me, and the eyes are only slightly different, with a fairly normal gap between eyes in the #cool ones, presumably meant to be like sunglasses, contrasting against an artificially wide gap between the eyes in the #happy ones (which also matched the eyes in the other three kinds). To remedy my error, I grabbed one of the #happy ones, ate it and replaced it with a #cool one for a second photo shoot.

Users of "smart phones" may be aware that different systems use different emoji graphics, so when you text with these things, the corresponding emoji on the receiving end may not look quite the same or convey quite the same emotion. And even when sender and receiver see an identical graphic, they're all up to individual interpretation. As far as the emoji pretzels go, the key issue is that the shapes of the pretzels don't come out exactly the same each time. The smiles and frowns in the designs were quite subtle as emojis go, so small variations in the curvatures that emerged during the forming or cooking processes seemed to affect the emotional impact. Bigger smiles and frowns in the first place might have lessened this effect. The emojis in the promotional materials for the movie sure looked more emotional than the pretzels.

The more fundamental problem with all five shapes was that by nature of being pretzels, everything with each piece had to be connected. Snyder's solution to this was to connect the eyes to each other and to the edges, and this made them all look like masked men. This might work better for the upcoming Emoji Batman Movie.

Regardless of these issues, they were good pretzels. With roughly round shapes (not quite as round in real life as those bag pictures) about an inch and a quarter in diameter and thin lines defining the shapes, there was a nice light crunch, a good helping of salt and lots of pretzel taste.

From the package: “Embark on an epic snack-venture! Made with the hearty & flavorful goodness that you expect from Snyder's of Hanover® pretzels in five fun emoji shapes that allow you to always #express yourself.” ... “The Emoji Movie © 2017 Sony Pictures Animation Inc. emoji® is a registered trademark of emoji company Gmbh used under license”