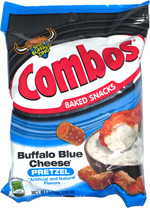 Taste test: This special flavor of Combos looked pretty much like the other flavors, as it consisted of darkish pretzel tubes filled with an orange cheese filling.

The resemblance didn't stop with just the look, as the taste was pretty much the same too. I could taste neither Buffalo wing sauce nor blue cheese; they pretty much tasted the same as the cheddar ones. The bag promised a "Spicy Buffalo Zing" but there was none. There was a weak hot aftertaste, but it was nothing special. Disappointing.

Smell test: I could smell a hint of blue cheese.

This snack was discovered by Jeremy at Dollar Tree. Review published April 2013.