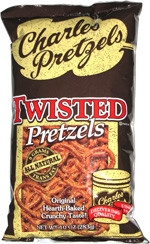 Taste test: These knotted pretzels were somewhat thick and quite large, with some pieces nearly four inches across. One nice touch was that the shapes were far less consistent than you typically see with knotted pretzels these days; some pretzels had their two large loops quite different in size. That was the first sign that these pretzels were actually knotted, rather than stamped out into knot shapes. The second sign was that a close look at the center of any particular pretzel revealed quite clearly the actual knot where the strip of dough had crossed over itself.

We crunched in to find that the taste didn't quite live up to the looks, as it was more average, with a somewhat doughy taste and a below-average level of salt. Still, a nice effort at keeping the pretzels old-school. 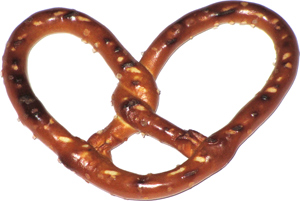 From the package: “Remember when deliverymen would bring legendary Charles Chips® to your home or office? Since 1942, Charles Chips® has been delivering smiles. Years ago, when the distinctive gold and brown tin showed up at your front door there was no mistake ... Charles Chips® had arrived. For over 70 years, people have been enjoying the taste of Charles Chips® products. We put that same tradition into all Charles Pretzels® Brand products and they're packed with the same great flavor you remember. Charles Pretzels are individually twisted and baked in our vintage hearth ovens for that perfect crunchy taste.”

This snack was discovered by Jeremy at Gristedes at 103rd & Broadway. Review published March 2014.