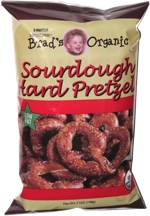 Taste test: This large bag promised thick, hard knotted pretzels, with pictures of some huge ones on the front of the bag. But when we opened it, it was filled less than halfway with pretzels, and the ones in there were in almost all cases broken, so there were few knots recognizable.

Still, once we crunched in to those broken pieces, the taste and texture were quite good. The thick pieces were solid and quite crunchy without being too hard, and they had a great pretzel taste, with a middling level of salt. The snackers who tried some while enjoying beer were quite impressed.

From the package: “Brad's Organic Sourdough Hard Pretzels exemplify the type of wholesome and delicious product that we are committed in bringing to you. Brad is sure you won't be disappointed.”