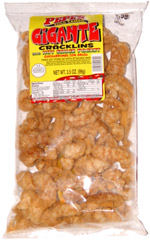 Taste test: These pork rinds stood out from the usual because instead of seasoning them with some particular type of spices, the folks at Rudolph Foods included a packet of hot sauce in the bag so that snackers could dip them.

In fact, this bag actually contained two such packets. We poured both packets into a small dipping bowl and let our snackers have at it. Those willing to eat pork rinds liked these a lot, as they were extremely crunchy and loaded with pork rinds flavor. The sauce had sort of a tomatoey taste when it first hit the tongue, then a nice kick of heat after that.

From the package: “Fried out pork fat with attached skin” ... “Chicharrones con grasa”