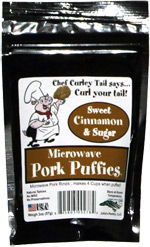 Taste test: These pork rinds were very controversial among our pork rinds fans, as some people claimed to be pork rinds purists and just didn't like the idea of a sweetened pork rinds and flat-out refused to even try them.

I poured the pellets into a bowl and put it into the microwave for two minutes, and most (but not all) of the pellets puffed up into your typical puffy rinds shape. We let them cool down and crunched into the puffy ones to find that there was a mild cinnamon sugar taste when the rind initially hit the tongue, and it quickly went away in favor of just the pork rinds taste. So they were less sweet than I thought they would be, and really not so sweet than anyone should reasonably be offended.

Smell test: Before cooking, nice cinnamon toast smell. After, more of a mix of cinnamon sugar and pork rinds smell.