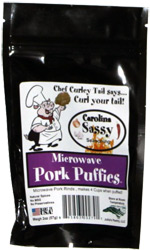 Taste test: These pork rinds were just pellets until I put them in the microwave, but even on the pellets, I could see some pepper seeds.

After a few minutes in the microwave, they did generally puff up, but the various pieces didn't cook evenly, as parts of several pieces didn't fully puff up. The un-puffed portions were pretty much inedible, but the fully puffed ones were really quite good. I ate them while they were still hot, and they were crunchy and loaded with flavor — lots of pork rinds flavor, and a mix of hot and sweet seasonings. The flavor was way more intense than your typical bagged pork rinds, though there was far less consistency of product from one piece to the next than regular bagged rinds.

Smell test: Definitely some black pepper in addition to the pork rinds smell.