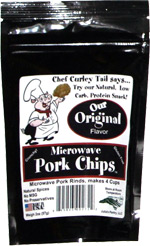 Taste test: We read the directions and then opened this package to find that the pre-microwaved pork rinds inside looked nothing like what we've come to know as pork rinds, as it was filled with thin, flat, dense, dark beige pellets.

But after pouring the contents into a bowl and running the microwave for two minutes, we were pleasantly surprised to see that the pieces expanded, puffed up and grew lighter in color, so that they looked exactly like pork rinds. Even after taking the bowl out of the microwave, there were still some crackling noises going on. We gave it a few minutes to cool down. The bowl was still too hot, but the pork rinds were just warm enough as we crunched in to find that were quite good, with more crunch than your average pork rinds, as well as a considerably more intense flavor. Some of the pieces were extremely crunchy, but the softer ones were a bit easier to bite into, though still on the crunchy side. Our pork rinds fans were very impressed.

Smell test: Smells just like regular pork rinds — both before and after microwaving.