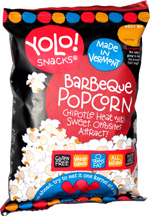 Taste test: We opened this bag to find that popcorn kernels in it looked generally smallish and had a light orange-colored coating on many areas of the kernels, but the majority of the surface area was bare white popcorn. The small bag was filled about halfway.

We grabbed a few kernels and noticed that the kernels felt even smaller than they looked initially. We crunched in to find a somewhat crunchy feel, unusual even for flavored popcorn, with a tasty kick of heat tempered a bit by some sweetness. The kernels with less of the orange color had proportionately less of the spicy flavor. The spicy ones tasted quite good, but the small kernels, strange texture and uneven flavoring did detract a bit from the overall experience.

Smell test: Nice kick of heat mixed in with a popcorn smell.

From the package: “Chipotle heat with sweet. Opposites attract!” ... “Go ahead, try to eat one kernel at a time.” ... “Made in Vermont” ... “Best by 12/11/14 But who's going to keep them around THAT long?” ... “Popcorn is a little universe of nooks and crannies just waiting for big flavors. We buy our kernels from a family in Iowa. Then we pop in our Popcorn Factory right here in Vermont and season them with classic flavors like chipotle and a touch of brown sugar.”