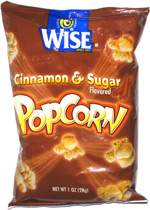 Taste test: It's surprising that with all of the popcorns we've reviewed, this is the first one with just cinnamon and sugar added, since it seems like such an obvious flavor. I opened the bag to find a bit of brown seasoning in the crevices of the kernels and a very sparse coating on the rest.

I crunched in and found that the kernels were fairly crisp and had a middling level of cinnamon sugar seasoning — far less than you typical heavily-cinnamon-sugared snack, but still more than enough to be able to taste. So it tasted like cinnamon toast, but super-mild cinnamon toast. The bag promised "just a little sweet" so Wise indeed delivered on that.

From the package: “Be sweet! Wise® Cinnamon & Sugar Popcorn hits the spot when you're craving something just a little sweet. Each kernel is sprinkled with sugar and spice and everything nice. So pop open a bag and savor the flavor of this sweet treat.”

This snack was discovered at Snaxpo. Review published April 2011.