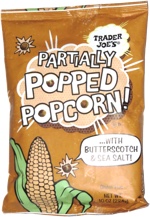 Taste test: This was the sweet counterpart to Butter & Salt version of Partially Popped Popcorn that we previously reviewed, promising a popcorn-like taste with a much harder crunch from kernels that didn't entirely pop.

I opened the bag to find that many of the kernels had hardly popped at all, while others popped just a little bit but still were far, far from looking like fully popped kernels.

I crunched in to find that the bitty pieces were quite crunchy, without being so hard as to risk breaking any teeth — so lots of crunch without feeling like I was biting into rock-hard entirely unpopped kernels. There was a good helping of sweetness at first, without being overly sweet, though I'm not sure I would have guessed butterscotch rather than caramel if it hadn't said so on the bag. After the sweetness wore off a bit, the corn taste took over, and that was good too, intensely corny and nicely salty, without tasting like burnt popcorn or anything.

I shared these around and found that most folks enjoyed the texture and taste a lot. A few people said they would have liked it better without the sweet stuff, but thankfully, there is a version for those folks too.

From the package: “You know all about half-baked right? But what about partially popped? This special variety of popcorn is processed using a proprietary method to produce the little crunchies usually found in the bottom of the popcorn bowl, but with a texture that makes them almost addictive & easier on the jaw! There is crunch in every kernel but no fluff.”

This snack was discovered at Trader Joe's. Review published February 2016.