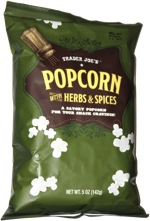 Taste test: This popcorn had generally an off-white color, plus a smattering of dark green seasoning bits that appeared to be dill. The bag was filled about two-thirds of the way. The kernels were about average in size.

I crunched in to find that the kernels were fairly crisp and had a tasty blend of seasonings, not over-the-top strong, but reasonably so and very flavorful. I couldn't taste the dill that I saw, but there was a nice mix of spices and herbs. Pretty good.

From the package: “Trader Joe's Popcorn with Herbs & Spices will surely satisfy snack time. We coat crisp popcorn with a savory seasoning blend including dill, celery seed and onion, and voila! — A savory popcorn for your snack cravings!”

This snack was discovered by Jeremy at Trader Joe's. Review published May 2016.