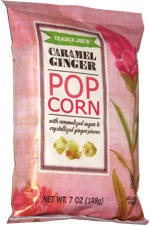 Taste test: These popcorn kernels were round, smallish and had lots of shiny yellowish stuff on surfaces. I crunched into find find a somewhat chewy feel, but still a nice soft interior, with a ginger zing that was far more noticeable than the caramel. The ginger pieces weren't easy to distinguish visually, but they really stood out in taste and texture, as they seemed to be the source of the chewiness and the fairly strong, sweet ginger taste. An unusual taste for popcorn, and a good one!

Unfortunately, there really weren't that many kernels in the large bag, as it was only filled about a third of the way — even less than some other disappointingly half-filled popcorn bags we've had.