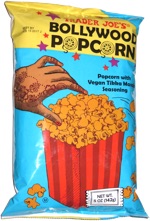 Taste test: This bag contained generally large popcorn kernels with an orange seasoning covering most of the surfaces except for some unseasoned white areas, plus some darker orange spots within those orange areas.

I crunched in to find a fairly mild tikka masala flavor on the first bite, but the flavor grew in intensity — and heat — as I ate more, so by the end of a few handfuls, it was a very intense flavor. There was a pretty good crispness too. Very nice.

We've noticed that many popcorn bags are not filled very generously, and this was one of the worst offenders we've seen recently — the bag was filled a bit less than halfway. Boo!

Smell test: We could smell the tikka masala, but it was much milder than other snacks with similar flavorings.

From the package: “Popcorn with Vegan Tikka Masala Seasoning” ... “The popcorn in this bag is like a ticket to an Indian spectacular: savory with aromatic spices. Who says the willing suspension of disbelief is limited to theatrical endeavors? We think our Bollywood Popcorn is the perfect match for a movie and a good seat on the couch with friends.”

This snack was discovered by Jeremy at Trader Joe's. Review published August 2016.