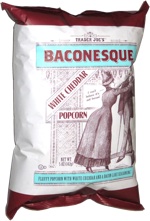 Taste test: This popcorn promised to taste like bacon but not actually contain any of it, so that sounded good to us, as long as it got the taste right!

We opened the bag to find it filled right to the top with off-white kernels with just the sparsest amount of tiny bits of dark seasoning. We crunched in to find a very tasty mix of cheddar and bacon, with plenty of cheese and a nice smokiness to the bacon. Very tasty, even if it didn't contain. Good stuff!

The ironic thing here was that we gave the flavor a bit of extra scrutiny because of the "Baconesque" name, but really most of the "bacon" snacks we've reviewed don't contain actual bacon, or any meat for that matter. Trader Joe's just made it a lot more obvious with the "Baconesque" label.

Smell test: More cheddar than bacon, but yes, a hint of bacon.

From the package: “Fluffy popcorn with white cheddar and a bacon-like seasoning” ... “If it tastes like bacon and it smells like bacon, it must be bacon, right? Well, not exactly. Trader Joe's Baconesque White Cheddar Popcorn is fluffy and crunchy, with the flavor of bacon. But no actual bacon. Instead, we've used a bacon-ish smoke flavor that will surely make you exclaim, 'Wow, this is delicious!' ”

This snack was discovered by Jeremy at Trader Joe's. Review published May 2016.