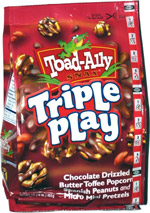 Taste test: This bag contained popcorn partially coated in butter toffee, then heavily drizzled with milk chocolate, plus some pretzels drizzled in chocolate and some peanuts.

Some of the kernels were individual pieces, but many were in clusters of up to 4 or 5 kernels. For the most part, the clusters of popcorn were separate from the individual coated pretzels, though there were a few clusters that included both. The taste was really quite good, with lots of great toffee and chocolate. Most of the clusters didn't have peanuts in them, but the ones that did were also quite good, with a nice bit of extra flavor. These came in a fairly large bag, so you have to be careful to avoid eating the whole thing in one sitting.

This snack was discovered by Jeremy at Five Below. Review published February 2011.