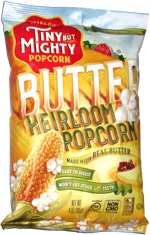 Taste test: We've now tried several kinds of miniature popcorn, so we're able to identify degrees of tininess. These kernels were indeed much smaller than stardard popcorn, but they were noticeably bigger than Pipcorn. The kernels were very bright white (not the expected buttery yellow based on the flavor).

We crunched in to find a good crisp feel, but unexpectedly, the taste wasn't at all buttery. It tasted like it was seasoned with something, as it wasn't just plain popcorn, but that mild seasoning didn't say "butter" to me. So it was good popcorn, indeed small, but the biggest word on the front of the bag by far was BUTTER (in letters measuring almost 3 inches tall) and my taste buds said it was entirely lacking in butter.

From the package: “Easy to digest” ... “Won't get stuck in your teeth” ... “Safety First: Keep teeth happy. Don't eat unpopped kernels. Popcorn not recommended for infants or toddlers due to choking risk.” ... “Countless popcorn fans with IBS, Crohn's and Diverticulitis are thrilled that they can eat Tiny But Mighty.”

This snack was discovered by Jeremy at Christmas Tree Shops. Review published December 2017.