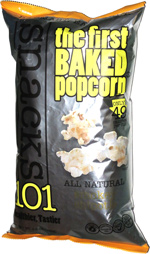 Taste test: This bag of popcorn promised to be a very strange one, as we'd never even contemplated "Baked Popcorn" before. (Isn't popcorn popped, not baked, by definition?) It also promised the seemingly miraculous feature of somehow excluding the popcorn hulls (but didn't really explain how they accomplished this). I was were eager to see how it delivered on the hulls exclusion.

I opened the bag to find that the kernels had a very light and evenly applied orange seasoning. The bag was filled just over halfway. As for no hulls, like the kernels pictured on the bag? It sure looked like the real kernels had hulls. I grabbed a handful of kernels and noticed that they were uniformly quite small, far smaller than almost any popcorn I've seen — even right at the top of the bag, where the largest kernels tend to gather. I crunched in to find a good crispness and very nice flavor. The chipotle flavor was just mildly hot, but it was quite tasty and mixed well with the taste of the popcorn.

Smell test: Good mix of hot peppers (though on the mild side) with popcorn.

From the package: “Only 49 calories per cup” ... “Healthier, Tastier” ... “A+ congratulations! By choosing this popcorn, you have just completed her first lesson in snacks101. Lesson #2: Why Baked? Baked snacks are better for you. Our baking techniques seals in the flavor with less oil. The result is a delicious, crunchy, healthier popcorn. You can immediately taste, feel and see the difference. Because our process locks in the flavors, you also get less mess on your hands and clothes.” ... “Made with Pure Coconut Oil”