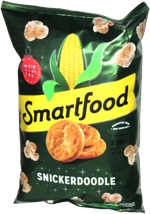 Taste test: This popcorn had a light, fairly even coating of cinnamon sugar, adding some brown to the white popcorn surfaces.

I grabbed a handful and crunched in to find a light crunch and a cinnamon flavor that was far less sugary than many other cinnamon snacks — just slightly sweet — with maybe a hint of butter as well. It was far less sweet than I expected, but I liked it a lot.

From the package: “Limited holiday flavor” ... “Clearly the products have been enlarged to show texture” ... “Air-popped popcorn tossed in sweet cinnamon and happiness. How did we turn dessert into popcorn? Well, we are pretty smart.”