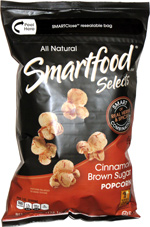 I crunched in to find lots of tasty cinnamon sugar, but with a surprisingly strong hit of butter as well. The butter was stronger at first, and the sweet cinnamon really kicked in after that. It was really tasty, and our snackers were big fans, returning to the bag for multiple handfuls.

From the package: “Popcorn enlarged to show texture”

This snack was discovered by Jeremy at Market Basket. Review published June 2012.