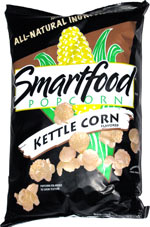 Now they're also using it for this kettle corn as well as movie theater popcorn. After reading the back of the bag, I was not optimistic, because this claimed to be "kettle corn flavored popcorn" (as in, not really kettle corn), and the bag also said "air-popped popcorn" — which would confirm that it was indeed not kettle corn, but rather sugar-coated popcorn. I opened the bag to find large, fairly round kernels with varying amounts of sugar on parts on the outside of some pieces. The result wasn't nearly as bad as I feared. The popcorn was crisp and lightly sweetened, with a tiny bit of salt too, unlike some other fake kettle corns that really overdo things. Our tasters quite liked it, but it still lacked the subtle awesomeness of a good kettle corn, where the sugar is lighter but everywhere (by virtue of being present at the time the corn pops in the kettle) and adds a slight crunch and sweetness to the entire surface.

From the package: “Is it really smart to let yourself fall in love with a snack? Of course it is! Especially when it's Smartfood® brand. We're talking about the delicious all-natural ingredients, air-popped popcorn adorned with the perfect balance of salty and sweet. You know you want it. You know where to get it. Now go out there and be smart about it.”

This snack was discovered by Jeremy at Market Basket. Review published September 2011.