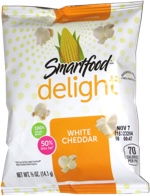 Taste test: These version of Smartfood (one of many products now sold under the name) promised the same flavor as the original white cheddar kind, but with less fat.

I crunched in to find a good crisp feel, with a tasty mix of white cheddar and popcorn. It was a lot easier to taste the popcorn than it is with original Smartfood, because there was a lot less cheddar to be tasted. Pretty good, buy way less cheesy than the original. A bit ironic that the one with less cheese should be labeled as a "Delight." (Also, much less white cheddar residue on the fingertips!)

Smell test: Strong popcorn and cheddar smell, much like the original.

This snack was discovered by Jeremy at Head of the Charles Regatta. Review published October 2017.