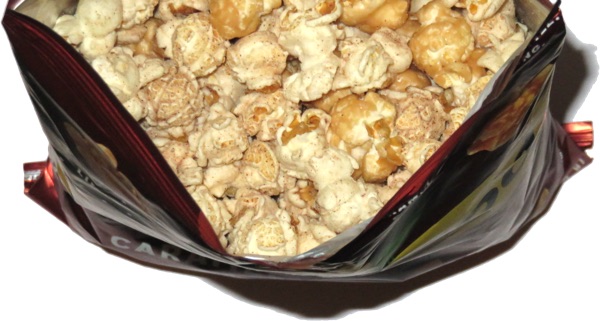 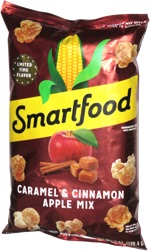 Taste test: This version of Smartfood contained two entirely different kinds of popcorn — one coated with caramel, the other lightly covered with a cinnamon and apple-flavored powder. A quick look at the two Ingredients lists (a separate one for each kind of popcorn, both fairly short) made clear that despite 1) Apple in the name 2) An apple pictured on the bag and even 3) the smell of apple, there was no actual apple anything used to make it.

The bag helpfully warned that the caramel ones were likely to sink to the bottom, so I shook it up as suggested, and even then, about 90% of the kernels visible from the top were clearly caramel corn. You might want to pour them into a bowl to maximize enjoyment.

I tried a few pieces of the cinnamon apple ones first, and they were very mildly seasoned, just slightly sweet (with some saltiness too) but with really not much cinnamon, nor apple, to taste. The caramel corn was another thing entirely, with a thick coating, crisp crunch, light feel and lots of tasty sweetness. I thought I could taste some apple in there too, despite the fact that the other kind was what was supposed to taste like apple. Eating the two together brought just the slightest amount of cinnamon to the mix, as the cinnamon apple ones didn't bring much flavor, but still, there was so much good about the caramel-coated ones that the combination still tasted good.

Smell test: Definitely can smell the apple! Like a fresh apple pie.

From the package: “Clearly this popcorn has been enlarged to show texture” ... “Limited time flavor” ... “Caramel popcorn may settle. Shake prior to opening.” ... “Fair warning: this popcorn may cause feelings of coziness.” ... “Air-popped popcorn that mixes the flavors of rich caramel and cinnamon apple.” ... “If warm feelings and nostalgia were snack food …” ... “Product of Canada”