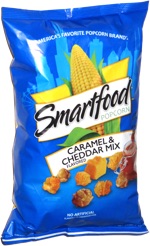 Taste test: As Smartfood has expanded from their original White Cheddar Popcorn, they've added a number of new flavors. This was the first one that combined two kinds of popcorn in the same bag. When I opened the bag, every kernel that I could see from the top, save for just a lone piece of caramel corn, was coated with cheddar. The kernels were fairly big and largely round. The cheddar ones were of the bright orange variety, not the white cheddar of original Smartfood.

I poured a whole bunch of them into a bowl — it ended up with three caramel ones and about 30 cheddar ones — and crunched in to find that there was a lot of cheddar but a somewhat mushy feel, not a crisp one. The caramel ones were better, with a nice light crunch from the caramel coating and a crisp, light feel inside, plus they tasted great, with a very buttery caramel flavor. As we got farther into the bag, the balance of caramel to cheddar did even out a bit, yet there were still many more cheddar ones than caramel. But tastewise, one caramel corn out of every handful turned out to be a nice balance to the cheddar. Very good!

From the package: “America's favorite popcorn brand” ... “When Smartfood® launched in 1985, it was with one very smart idea: Create great tasting popcorn with quality ingredients. You can taste a passion for popcorn in all the delicious varieties of Smartfood® created since.”

This snack was discovered by Jeremy at Target. Review published July 2017.