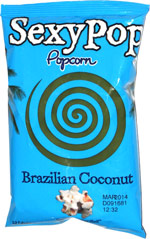 Taste test: This bag of popcorn contained fairly large, bright white kernels with no visible signs at first glance of coconut or other seasonings.

We crunched in to find a mushy feel from the popcorn and a gritty feel from the (apparently invisible) seasoning powder. The mix of mushiness and grittiness was a definite negative. It wasn't even gritty in the typical coconut way, as the coconut seemed to have been ground very finely, so it was just gritty. The seasoning had a mildly sweet taste at first, and then less sweetness after that. It didn't really taste much like coconut, except maybe very vaguely, but so vaguely that if it hadn't said "coconut" on the bag, I probably never would have guessed. Weird.

Smell test: Not that much like coconut. Sort of vaguely cinnamon-like. 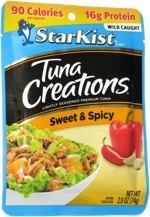