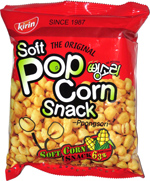 Taste test: This bag of "Soft Pop Corn" contained a snack that didn't look much of anything like what we normally think of as popcorn. Instead, the pieces were shaped kind of like Corn Pops cereal, though quite a bit different from that too. Unlike the uniformly colored cereal, this was generally kind of dirty yellow in color but also had some dark areas and spots throughout.

As the name said, the prices were soft, with minimal crunch. The taste was pretty good, with slightly sweetened corn flavor, much like Corn Pops. All of the snackers who we offered some to enjoyed the taste, and several of them came back for multiple handfuls.

From the package: “Ppongsori has tasty flavor from corn and butter, healthy snack for family, friends and loved ones.” ... “Product of Korea”