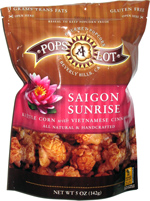 Taste test: This resealable bag contained popcorn kernels of various shapes, with some shiny sugary areas on the surfaces, plus lots of small spots of cinnamon, both on the shiny parts and the rest.

We crunched in to find a very nice texture, with a good crispness and a subtle crunch that felt a lot like freshly made kettle corn. There was a nice mild kick of tasty cinnamon sugar. We're no experts on the different types of cinnamon — the kind used here was Vietnamese — but this did taste a bit different from your standard cinnamon toast, and it tasted really good. Our snackers were very impressed. Excellent!

Smell test: Kind of like cinnamon toast, but with a little something extra.

From the package: “Kettle corn with Vietnamese cinnamon” ... “From tender sticky buns to Grandma's apple pie, nothing stirs the senses like a warm swirl of cinnamon. Popsalot's hand-crafted Saigon Sunrise showers batches of our irresistibly crisp & salt-kissed kettle corn with pure Vietnamese cinnamon, prized around the world for its uniquely rich & complex flavor. This tempting blend of all natural sweetness, comforting spice & unexpectedly addictive savory is our favorite way to greet the day & end the night with a smile.”

This snack was contributed to Taquitos.net by the manufacturer. Review published September 2013.