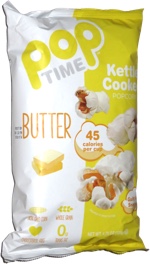 Taste test: This popcorn had an off-white color but not really anything that looked yellow as you would expect from buttered popcorn.

Another thing that you would expect from buttered popcorn is butter; when we saw the words "allergen free facility," we figured that it meant there was no dairy, and indeed a check of the ingredients indicated that there was none. None of that really mattered when we crunched in, though, as there was an excellent salty and buttery taste to go along with a fairly crisp feel. As with Pop Time's White Cheddar version (which contained no cheese), they were very low-key on the packaging about the lack of dairy, which is surprising, given that some folks would seek out such a thing, especially when it really tastes like butter.

From the package: “Finally … a snack you won't live to regret later! Our popcorn is light, airy, and packed mouthwatering flavor. But lucky for you, it's not packed with calories, trans fats, or GMOs. So go ahead and eat it by handful. We won't tell.” ... “Made in an allergen free facility”

This snack was contributed to Taquitos.net by the manufacturer. Review published January 2018.