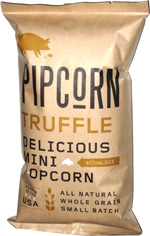 Taste test: This popcorn promised to be small, and indeed it was, as we found the kernels to be the smallest fully popped ones we've ever seen. Another popcorn that we recently reviewed, from Snacks 101, also stood out for its small size, but it wasn't something that they promoted on the bag — and these kernels turned out to be far smaller than even those. Whereas a normal kernel is about the size of a quarter, these were generally smaller than a penny.

It also said on the bag that the hulls would not get stuck in anyone's teeth. Although they looked much like typical hulls, they turned out to be right about the teeth.

The kernels had a good crispness and a light crunch. As for truffle flavor, the level of seasoning varied from one mini-kernel to the next, but it was generally on the mild side and tasted very good. We shared these with lots of snackers, and everyone was pretty thrilled with the texture and taste.

From the package: “Popped in the USA” ... “All Natural” ... “Whole Grain” ... “Small Batch” ... “How are we different? Glad you asked! When we pop our mini kernels, the shells break up into itty bitty pieces. Finally, popcorn that's kind to your teeth! Pip pip hooray! Pipcorn is popped in small batches by hand. We use as few ingredients as possible and never add preservatives, so no need to feel guilty.”