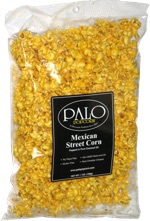 Taste test: I'm a relative newcomer to the concept of Mexican street corn (or Elote), but I've quite enjoyed several different variations of it at Mexican restaurants and food trucks in recent years. When I discovered the Street Corn version of Trader Joe's Corn Chips, I was just floored by how tasty that seasoning could be on corn chips, resulting in some of the best chips ever. So you can imagine how excited I was to hear that Palo was making Street Corn Popcorn!

The kernels had a fairly uniform pale orange color on their surfaces, plus some scattered tiny black and brown bits. I grabbed a handful and crunched in to find a whole lot of flavor, cheesy and buttery and zippy from a tasty combination of peppers and spices. There was also some mild heat in the aftertaste. Very tasty, and a reasonable reminder of the taste of Mexican street corn. (Another thing that reminded me of street corn was the stuff that got stuck in my teeth, but still, it was way less messy than real street corn!)

From the package: “Popped in Pure Coconut Oil”

This snack was contributed to Taquitos.net by the manufacturer. Review published May 2020.