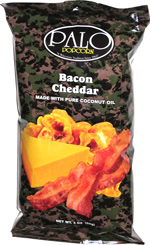 Taste test: This popcorn had a bright orange color, with different levels of orange on various parts of the surfaces, but some sort of orange nearly everywhere, not much white.

I grabbed some kernels and crunched in to find that there was quite a lot of cheddar, with a fairly strong smoky flavor, but it really didn't taste like bacon, just cheese and smoke. (Unlike some snacks that include "Smoke Flavor" in their ingredients, this one did include a mention of Bacon Fat. But it did not do the job.) The kernels were not particularly crisp, as many kernels were a bit mushy. Good for loading up on cheese, but a real bacon taste would have been better.

Smell test: Kind of smoky but not really bacony.

From the package: “Made with pure coconut oil” ... “We at Palo Foods hope that you enjoy the taste of our natural cheese drenched popcorn. Our whole family is passionate about food. We even have a chef in the family and own a restaurant.” ... “We pop in small batches and then put real Wisconsin cheese on making sure that each and every kernel is completely coated.”

This snack was contributed to Taquitos.net by the manufacturer. Review published July 2015.