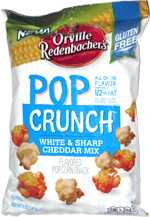 Taste test: This bag of popcorn promised the unusual combination of two different kinds of cheddar on the various kernels, a departure from the common practice of combining two (or all three) of caramel corn/cheddar popcorn/butter popcorn. It seemed strange to pick these two, because I didn't figure there'd be enough of a contrast between the white cheddar and sharp cheddar. I was also taken aback by the bag's non sequitur claim of, "All of the flavor 1/2 the fat of regular potato chips." That seemed wrong on all sort of levels. Why do non-potato chip snacks always need compare their fat to potato chips? Who cares — they're not potato chips! And were they really trying to say that this cheddar popcorn has the flavor of potato chips? Didn't think so.

Fortunately, bag nonsense aside, this turned out to be very good popcorn. The two kind of cheese were easily distinguishable by color, as the sharp ones were quite orange versus an off-white for the white cheddar ones, and the flavors were also quite different, with a creamy cheese taste for the white ones and a sharp, tangy, sweet cheddar for the sharp cheddar ones. The kernels were crisp and had a mild crunch, with lots and lots of flavor (and I'm pretty sure there was a good helping of sugar in addition to the cheese). Our tasters were quite impressed as they enjoyed multiple handfuls.

From the package: “All of the flavor 1/2 the fat of regular potato chips*” ... “Gluten free” ... “Kids Safety: While popcorn is a delicious snacking choice, it is never recommended for infants or toddlers, as the popped kernels can pose a choking risk to their safety.” ... “Orville Redenbacher's passion for popcorn has led to new Pop Crunch, an exciting alternative to other snacks. We season our large popped kernels with delicious combinations of ingredients for a big burst of flavor and a satisfying crunch.”