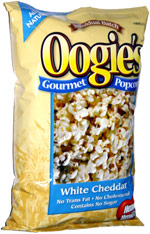 At first, I could barely taste any cheese at all, but as I ate more kernels, the cheese increased in intensity and tasted pretty good. Still not a ton of cheese, but it was a good sharp cheese taste. The popcorn was somewhat crisp, as in more crisp than the other Oogie's varieties that we tried, but still less crisp than a good crisp popcorn. Probably about average as white cheddar popcorns go.

Smell test: At first it smelled just like popcorn, then maybe a bit chemically, not really cheddary.

From the package: “No Trans Fat • No Cholesterol • Contains No Sugar” ... “Heart Healthy!” ... “We at Oogie's are popcorn lovers. Even the word popcorn can put a smile on anyone's face. But we believe that popcorn should not have to hide behind sugars and artificial colors to give it taste. So we decided to put the natural pop back into the corn.”

This snack was contributed to Taquitos.net by the manufacturer. Review published August 2007.