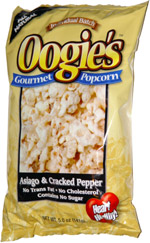 Taste test: This popcorn was loaded with lots of cheese, and the flavor was quite good, as we liked the taste of the asiago, as it was a nice change from the usual white cheddar that so many snack companies put on their popcorn.

There was some black pepper in the taste as well, but not a whole lot, as it was greatly overshadowed by the asiago. The popcorn was not all that crisp, as many of the kernels were just a bit mushy, but otherwise our tasters liked this popcorn a lot.

From the package: “No Trans Fat • No Cholesterol • Contains No Sugar” ... “Heart Healthy!” ... “We at Oogie's are popcorn lovers. Even the word popcorn can put a smile on anyone's face. But we believe that popcorn should not have to hide behind sugars and artificial colors to give it taste. So we decided to put the natural pop back into the corn.”