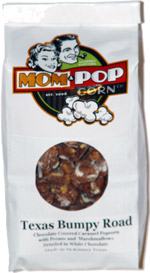 They started with popcorn kernels, coated them with caramel, then added a lot of milk chocolate, some pecans and bits of marshmallow, then finally drizzled on some white chocolate. Most of the pieces were clusters of four or more popcorn kernels. The taste and texture were just excellent, as the kernels were crisp and crunchy from the caramel, the chocolate was thick and tasty, and the occasional marshmallows encountered were extremely chewy. It wasn't the melty sort of marshmallow texture that I normally expect, as the chewiness was entirely different, and was tasty and quite nice. The pecans were full-size unbroken pieces, and they weren't in every cluster, but they definitely added their own taste to the ones that had one. The mix of tastes and textures was just excellent, and I quickly ate this entire bag.

Smell test: Very nice mix of marshmallow, caramel and chocolate, with marshmallow the most dominant part.

From the package: “Chocolate Covered Caramel Popcorn with Pecans and Marshmallows Drizzled in White Chocolate Made in McKinney Texas”