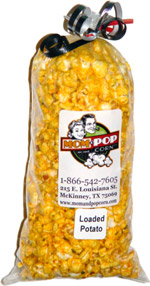 Taste test: This cheesy popcorn aimed for the taste of a loaded potato, which was quite a challenge considering that we've eaten "loaded potato" flavored potato chips, yet these had lots of corn and no potato.

The taste was very nice, with a good mix of cheese and spices. When I tried to think "loaded potato" while eating some, I thought there might have been a hint of the loaded baked potato taste, but mostly there wasn't, as the cheese and spices were far stronger than any hint of potato that I tried to taste. But still, these were pretty good as spicy cheese popcorns go, very tasty.

This snack was contributed to Taquitos.net by the manufacturer. Review published March 2010.