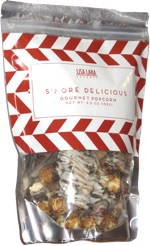 Taste test: When I bought this bag of popcorn, I was attracted to the idea of a popcorn that was flavored to taste like s'mores. I opened it and started grabbing some pieces to discover that was actually way better than that — it was more like s'mores made with popcorn, as it contained roundish kernels of caramel corn, held together into clusters by bars of chocolate, drizzles of chocolate and graham crackers. That's two-third of the essentials of a s'more! Unfortunately, they were also held together by a sugary white drizzle that didn't taste like marshmallows.

The result was a very tasty mix of great things, but the lack of marshmallow did cause it to miss the s'mores flavor target a bit. The coated kernels had great feel, with crisp, soft interiors, and the chocolate, graham crackers and frosting worked together well. If Lisa Lara could have figured out a way to make that white frosting taste like marshmallow, they could have really had it all here.

Smell test: I can smell the chocolate and graham crackers, but the sugary stuff didn't seem at all marshmallowy.