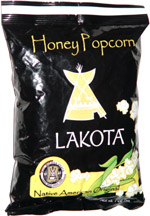 Taste test: This popcorn had a fairly thick coating of a slightly yellowish glaze.

From the package: “Native American Original” ... “From the Harvest of the Lower Brule Sioux Tribe”

This snack was discovered by Kerstin and Brian at National Museum of the American Indian, Battery Park, NYC. Review published June 2009.