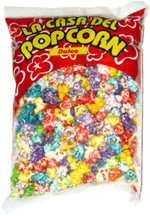 Taste test: This sweetened popcorn was among the most colorful that we've seen, as it included kernels colored red, bright purple, mustardy yellow, bright green, teal and orange.

The level of color coverage varied from kernel to kernel, as some kernels were covered almost entirely with color, while others had about 50% coverage. The kernels had a good crispness upon biting in, as the texture was sort of a cross between kettle corn and coated popcorn. The real mystery surrounded the tastes of the various colors. There did seem to be some sort of fruit flavors, but they were subtle. The strongest was probably the grape-flavored purple ones, but even then it was subtle. Some of our tasters also noticed a slight hint of lemon in the yellow ones, cherry in the red ones and apple in the green ones, but the fruit flavor was very mild in all cases. Some of our tasters were very skeptical of eating popcorn with such bright colors, but when they were talked into trying a few kernels, most people did enjoy the taste.

This snack was contributed to Taquitos.net by the manufacturer. Review published November 2008.