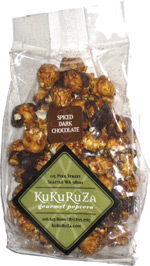 Taste test: This small bag was filled all the way with round popcorn kernels coated in caramel and then sprinkled with dark chocolate.

The chocolate level varied vastly from one kernel to the next, as most had a little, some had none at all, and others were nearly coated in it. Most of the kernels were individual pieces, but some were stuck together by the chocolate in clusters of as many as five. When I first crunched in, all I tasted was lots of caramel and dark chocolate, but as ate more (hard to resist) the "spiced" aspect of the flavor began to kick in, as there was a mild amount of heat that did spice things up a bit. The heat wasn't all that impressive, but it did grow as I ate more and more popcorn, adding some interest to this popcorn mix.

This snack was discovered by Bev. Review published March 2011.