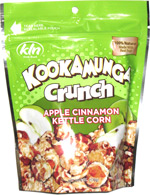 Taste test: This popcorn looked a lot like caramel corn at first, with a golden color, but a closer look revealed small bits of apple stuck to some of the kernels. The kernels were all individual; none were stuck together. It was hard to tell from looking whether this was kettle corn or coated popcorn, as some of the kernels appeared to have just the slightest amount of sugar, while others were more heavily coated in sugary stuff.

I crunched in to find that it was maybe a combination of both, as if they took kettle corn and then added small bits of cinnamon-enhanced apple. The texture varied from somewhat crisp to somewhat mushy, maybe depending on how much of the apple had been added to any given kernel. More crispness would have definitely helped, but the apple and cinnamon taste was quite nice, so this pretty good. It got lots of thumbs-ups from our snackers.

From the package: “100% Natural Made With Real Fruit” ... “Gourmet Kettle Corn with apple and cinnamon is simply irresistible, and made with the finest all natural ingredients! Sweet and salty kettle corn is mixed with a combination of apples and cinnamon, creating irresistible treat. You'll be hooked!”