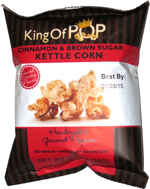 Taste test: This small bag was filled nearly to the top with kernels in a variety of sizes, featuring lots of sugary and brownish spots.

We crunched in to find a nice crispness and good sweetness, with a light hint of cinnamon. Unlike most kettle corns that bring a mix of salt into the sugary flavor, this one didn't have much in the way of salt that we could notice.

We shared it around among some hungry snackers after they ran up and down some hills, and everyone who tried it quickly became a fan. One of those snackers was youngster Tommy, who initially had no interest in even trying a kernel, but once he did, it brought a smile to his face. He came back several times to ask for more.

From the package: “Bold, original, delicious popcorn — that's what KingOfPop.com is all about. Every day, we handcraft batches of our popcorn using only the finest ingredients to bring you an irresistible snack with a freshness you can taste.” ... “Non-GMO Corn” ... “No Added Preservatives” ... “Zero Trans Fat” ... “Whole Grain”