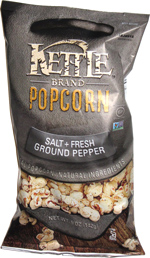 Taste test: The popcorn kernels in this bag were generally large and had just a smattering of large black pepper bits on their surfaces, a change from the numerous smaller bits we've seen in some other pepper popcorns.

I crunched in to find a very nice crispness and soft feel, plus a very flavorful mix of pepper and salt. The black pepper was fresh-tasting and started out a bit mellow, with maybe a hint of sweetness on the first bite, then got fairly intense after eating several kernels in a row. Tasty and good!

From the package: “Who said we have to stick to potatoes? Awesome flavor is king around here, and we're not afraid to try something different in pursuit of superior taste. Kettle Brand Popcorn is like lifting the lid off your mother's cast iron skillet (when she isn't looking) and grabbing a handful of fluffy popped kernels.” ... “Salt & Fresh Ground Pepper is the ultimate union of flavor opposites. Every salt must have its pepper. Every pepper ... you get the point. Opposites attract — forming a truly bold flavor marriage.”