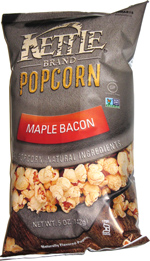 Taste test: This bag contained generally large kernels with an off-off-white color and some light brown specks scattered about.

We crunched in to find a very nice crispness and soft feel, with a mildly sweet, mildly smoky taste. When we offered this popcorn to a bunch of hungry snackers, most people were eager to grab a big handful as soon as they heard "maple bacon." Reactions were mixed. Most people liked the taste, and quite a few of them were quite thrilled with it as they went back for handful after handful. Some thought the taste was weird, though not bad. Some people liked the taste initially but found the aftertaste to be unappealing. Everyone was quick to offer opinions on this one!

From the package: “Who said we have to stick to potatoes? Awesome flavor is king around here, and we're not afraid to try something different in pursuit of superior taste. Kettle Brand Popcorn is like lifting the lid off your mother's cast iron skillet (when she isn't looking) and grabbing a handful of fluffy popped kernels.” ... “This unexpected match combines the deep smokey flavor of bacon and the rich sweetness of maple sugar for a nostalgic, comfort food combination.”