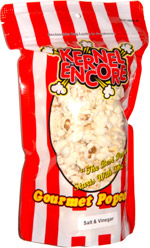 Taste test: We've had lots of salt and vinegar chips, but this was a new flavor for us as far as popcorn goes.

The first few kernels that I tried were quite vinegary, but they were lacking in crispness, as the kernels had a somewhat mushy feel. As we ate more pieces, the mushiness remained, but we found that the level of vinegar varied from one piece to the next, with many having very little vinegar. Oddly, there were small spots of purple on a few of the kernels.

From the package: “Reclosable Bag Locks in Freshness"

This snack was contributed to Taquitos.net by the manufacturer. Review published October 2008.