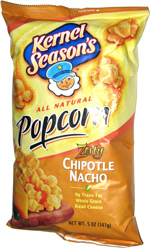 Taste test: The popcorn kernels in this bag generally had a very light orange coloring, with just a few darker spots here and there.

I crunched in to find good, crisp kernels with a tangy, tasty nacho cheese seasoning. There was a mild heat, at least at first. Shortly after that, the flavor did indeed get zesty, as the burn got fairly intense in the aftertaste, especially when I ate several kernels at once. Very flavorful, nice texture, quite good!

Smell test: Good spicy cheese smell, but not really strong or anything.

From the package: “Ever since I was a kid, I made stovetop popcorn. I watched with delight as the small kernels sizzled and a flurry of explosions magically transformed a few simple ingredients into my favorite snack. As a student at the University of Michigan, I experimented with various seasoning blends. That was when I founded Kernel Season's Popcorn Seasoning - a line of 18 all natural, shake-on flavors. I called it the 'No More Naked Popcorn' Revolution.”