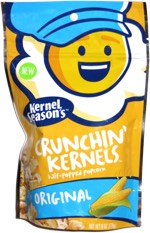 Taste test: We've reviewed a handful of kinds of half-popped popcorn, but they're still rare to find. When we do try them, they generally generate a wide range of opinions from the snackers with whom we share some. There are always some huge fans, but many people complain that the taste is burnt and/or the feel and is way too hard. However, things went a bit differently this time!

We opened this resealable bag to find that the kernels looked quite a bit different than other half-popped brands. They didn't look like half popped corn, as more of the husk was visible, similar to Cancha Corn except more popped, though there was quite a lot of variation in how the pieces looked. Most of the pieces were far less extremely crunchy than some of those other brands, with a nice crunch that was harder than popcorn but wasn't too hard. The taste was great, with a tasty mix of corn, salt and butter, but not in a way that closely resembled popcorn. We shared these with lots of folks, and nearly everyone who tried some liked them a whole lot. Lots of people came back for additional handfuls. A few people weren't impressed, but the reaction was almost entirely positive. Very nice!

From the package: “half-popped popcorn” ... “Half-popped. Full crunch. Crunchin' Kernels delicious kettle cooked, partially popped kernels. They are crunchier on the outside than regular popcorn, but still tender inside. Lightly salted and packed with flavor, they are the perfect snack anytime.”

This snack was discovered by Jeremy at Shaw's at Boston University. Review published .